I’ve heard many fabricators and steelworkers ask this. Their efficiency is so much associated with the type and thickness of materials and power resources that many of us, especially the beginners, find it hard to decide if a plasma cutter is preferable to a cutting torch, a century-old system that we call “oxy-fuel” torch these days. Well, here is what I can tell you.

A plasma cutter is better than a cutting torch as you want to cut and gouge thin, non-ferrous metals with more precision, narrower kerf, less distortion and slag, and no pre-heating. But plasma systems cost higher than an oxy-fuel cutter. It yields greater versatility too.

I know this brief statement leaves me a lot to explain, and that is what I’ll be doing in the next sections of this article. 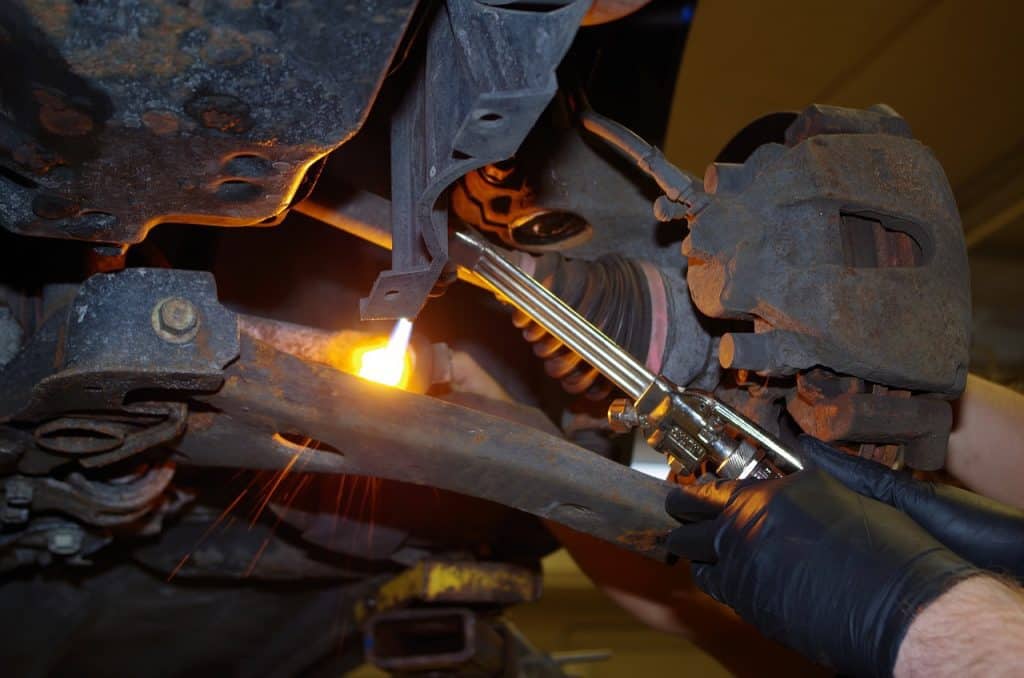 Plasma Cutter vs Cutting Torch: Choosing the Better One

Since none of the cutting tools are absolutely better than the other, I think you should learn as much as you can about both tools and their operational methods before you start a project.

How Does a Plasma Cutter Work?

The process uses a specialized torch with a nozzle orifice located inside. It requires the formation of a plasma arc which begins with gases like shop air, argon, nitrogen, or oxygen being forced through that orifice.

Then, the arc which is a high-pressure gas flow gets introduced to an electric arc created from an external power supply. Thus, occurs a plasma jet that reaches a maximum temperature up to 40,000° F.

This jet can heat, melt, and pierce through a wide variety of electrically conductive materials such as aluminum, stainless steel, cast iron, etc. into custom designs and shapes.

Nowadays, we see two types of plasma torches such as high frequency (HF) and contact start, depending on the starting method.

Torches with HF start don’t use any moving part, which means few things may go wrong in terms of efficiency and usability. Contact start torches employ a moving electrode to create a spark to light the arc. These models are is safer than the HF torches due to their zero likelihood of doing anything with other items that use electricity.

Again, this is another aspect I should point out. A plasma torch can be either a single flow or a dual flow tool. Remember these points:

Different combinations of plasma and shielding gases are required for the intended quality, and speed, and budget. For your understanding, I’m putting the combinations in this order (shielding gas + plasma gas) in this list:

The above gas mixtures are proven to provide excellent cut quality, little dross, economical operations, and parts life. You shouldn’t use a mixture of nitrogen, hydrogen, and argon for mild steel. Similarly, a mixture of air and oxygen is not recommended for aluminum and stainless steel.

Unlike a cutting torch, a plasma cutter doesn’t use the “oxidation” process to cut through metal. Ideal choices for this method include conductive and non-ferrous metals like aluminum, copper, brass, steel, etc.

For stacked metals, plasma cutting proves to be more suitable than an oxy-fuel system. You can also cut some ferrous metals. But the thinner material you choose, the better output you’ll get. Plasma cutting is practically a good choice for cutting shaped metals such as angles, tubes, channels, etc.

An average plasma cutter can handle material with a thickness from 1/4 inch to 1 inch. Some models with higher specs (amp outputs) can handle up to 2 inches. High-definition plasma machines can cut up to 6-inch steel. Except for the intended details and intricacies of the cuts, a cutting torch is a good choice when your work material is thicker than 1 inch.

Much of the versatility that a plasma cutter offers is limited to cutting and/or gouging. The equipment significantly aids in artwork, HVAC and plumbing tasks, metal fabrication and repairs, recycling and demolition work, building, and automobile projects.

A plasma cutter produces minimal slag but facilitates the work with its precision and speedy operations. You don’t need to use much energy to do the cleanup. A quality cut should be smooth, and the kerf needs to be narrow. These factors set the equipment apart from a cutting torch, making it more appropriate.

Another obvious benefit is that you don’t have to preheat the workpiece. It saves a significant amount of time before the process actually begins. In addition, the process doesn’t leave much metal distortion, a very common problem with thin materials.

When you have to cut a large volume of thin metal sheet or plate and you expect excellent grate-cutting performance without spending a lot of time, a plasma cutter is what you’ll want. Also, plasma cutting results in acceptable angularity considering edge deviation and quality.

Apart from the metal thickness a plasma cutter can handle, the cost of an average machine is higher than that of an oxy-fuel setup. Even if you are looking at a typical plasma system, you’ll need at least $500 where the cost may go up to $4,000, and I’m not talking about a high definition system that would cost even more.

Other factors that add up to the operational cost include the electrodes and plasma tips which can be anywhere between $15 and $20 per set. The utility (electricity) cost is also considerable, but it won’t be as much as that of the fuel required by cutting torches.

Now, I’ll discuss the same factors for an oxy-fuel cutter so that you can identify which one is superior to the other and in terms of what.

How Does a Cutting Torch Work?

A cutting torch employs a thermal process that uses a mixture of oxygen and a fuel gas. The gas mixture is required to preheat the workpiece (metal) to its ignition temperature while keeping it below the metal’s melting point.

Pure oxygen in the form of a stream or jet is directed through a nozzle in the torch into metal’s preheated area. This particular action instigates a forceful exothermic reaction between the metal and oxygen and results in the formation of slag or iron oxide that has a melting point lower than that of the metal being worked on.

The oxygen stream then blows the slag away without any effect on the non-oxidized part of the metal. The process is continuous, and a cut is created as you move the torch. It is imperative for the metal being cut to stay heated during the process because the consistency of the exothermic reaction depends on it.

You can choose from different nozzle designs and fuel gases to optimize the quality and speed of the cuts considering the needs of your project. Due to the use of oxygen with fuel gases, the method is known as oxy-fuel cutting.

Two designs are common such as injector and nozzle mix torches.

Injector models are more versatile than nozzle mix torches because the former lets you use the torch without problems when there is a gas pressure drop or a low pressure, which can be common with long hoses.

A cutting torch uses any of acetylene, propane, MAPP, natural gas, and propylene, and oxygen is common in any process. Each of these fuel gases affects the cutting speed and quality in the following ways:

The choice of materials is extremely limited in this case. For a metal to be ideal for oxy-fuel cutting, its oxides need to come with a melting point lower than that of the metal itself. Some low alloys and mild steel fall under this category, and so, you can cut only those materials with a torch.

You must rule out aluminum, brass, copper, stainless steel, and all other non-ferrous metals. I’m going to explain the composition of steel so that you can understand when it is a good candidate for the job and when it is not.

Carbon is the element of consideration in the composition. If the amount of carbon exceeds by 0.3%, you should avoid using oxy-fuel cutting. Other elements in this category are chromium, silicon, nickel, molybdenum, and manganese. These elements cause contamination to your workpiece, and their concentration is very hard to oxidize.

Manganese, phosphorous, silicon, and sulfur have minimal effect if their amount is only 1% or lower in the base metal. Mild steel contains up to 98% iron, 0.3% carbon, 1% manganese, and several other elements in very small amounts. So, choose ferrous metals that contain iron as the principal part.

A cutting torch is good at cutting thick mild steel or any suitable metal. Average thickness ranges from 6 inches to 12 inches. Some models handle steel that is thicker 20 inches.

So, you see the material and thickness you want to work on are pretty important when you choose between plasma and oxy-fuel cutting.

Oxy-fuel torches are more versatile than plasma cutters but in a different way. You can use a cutting torch for heating (shaping and treating), brazing, cutting, gouging, soldering, and even welding. Thus, these tools are popular among automotive workers, stone workers, and other industries including glass, jewelry, and platinum production.

A cutting torch is designed to handle thick materials that contain mostly iron and other elements in very small proportions. Precision can be achieved with proper concentrations and selections of oxygen and fuel gases. Also, the kerf can be narrow, if not as the one you can have with a plasma cutter.

With everything arranged appropriately, you can expect cuts with the following qualities:

However, a cutting torch doesn’t make the job faster than a plasma system. So, you need patience and undivided attention to ensure quality cuts. Any failure in doing this the right way, you may end up having a serious compromise on the edge quality and deviation.

An oxy-fuel torch may cost between $200 and $1,200 plus $10-$20 more for replacement tips. The cost of oxygen and other fuels adds significantly to that of the setup, but this particular expense is required every time you start a project.

Now, you can tell which one is clearly the more affordable option. Is it true even for the operating cost? Yes, it is! Let me explain. Let’s assume you have a 450 A plasma system because that makes a good choice for most DIY projects, and the materials you’re going to cut are not thicker than 1 inch.

Whether you employ a single or multiple oxy-fuel torches (up to 4), the cost will be lower per inch than what it would be with a 450 A plasma cutter. Using 4 torches instead of one plasma cutter, you can also expect nearly the same speed. However, the cost of setup, in this case, will increase considerably.

So, is there anything special about a plasma cutter which is not achievable with a cutting torch? Even you can optimize the cost and speed while using a cutting torch, a plasma machine is still more desirable when quality cuts & edges, precision, and intricacy matter.

Finally, I’ll talk about portability and safety which make a plasma system different from its oxy-fuel counterpart. Plasma machines do not involve the handling or storage of any explosive gas. In addition, you won’t be working with an open flame.

With an oxy-fuel torch that allows you to work from a distance, you can avoid heat or flames, but they are not non-existent. So, plasma systems give you an advantage here in terms of safety. Don’t you think?

Both systems offer portability in a sense that a plasma machine is more convenient to carry while you can enjoy the same with any of the oxy-fuel outfits with 75- to 200-foot torch hoses.

And that brings you to the end of my discussion. Write to me if you need additional information on the operational procedure or anything that helps you pick up the better of the two.